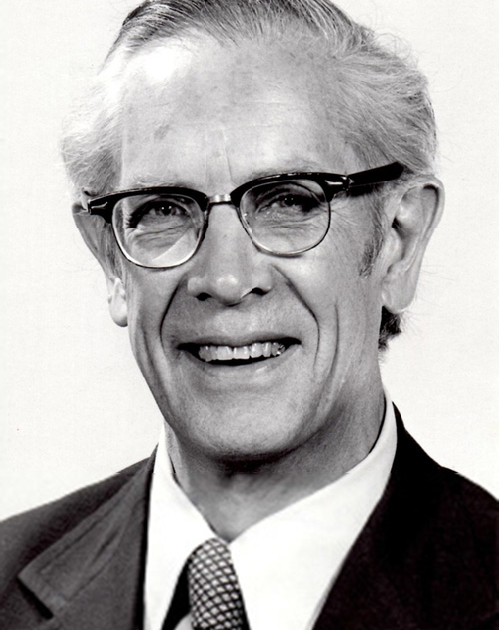 Father E. Peter W. Nash, SJ, the first president of Campion College at the University of Regina, was born in India. He was raised and schooled at Stonyhurt College in England from ages three to eleven. Father Nash emigrated to Canada in 1925 with his mother and four brothers, celebrating his twelfth birthday in mid-Atlantic. He went to the Irish Christian Brothers School in Vancouver, earning his senior matriculation at the age of 15. After working two years at the Bank of Nova Scotia, he spent a year working on a Teaching Certificate, then entering the Novitiate of the Society of Jesus (The Jesuits) in 1931.

He was ordained in 1944, following studies in theology and philosophy in the tradition of Jesuit formation. Having also attained a degree in classics from University of Toronto, he went on to complete a doctorate in philosophy from that university in 1948. His teaching career began at Regis College, Toronto (nine years), continued at Mt. St. Michael’s at Gonzaga University in Spokane, Washington (three years), and reached its most distinguished phase at Campion College in Regina (1961-1978). He was professor of philosophy and rector, and after sucessfully negotiating the federation of the college with the University of Saskatchewan–Regina Campus in 1965, became its first president. It was accomplishing federation which earned him the recommendation for the Order of Canada in 1983. He set firmly in place a relationship between the college and the university that has been beneficial for both institutions and for the Roman Catholic community in Regina in particular, and for the educational community of Saskatchewan in general. In the words of a fellow-Jesuit, Jasques Monet (president, University of Sudbury), Father Nash had a “commanding and critical role in Catholic university education. At a time of serious challenge and difficulty he took the kind of creative—not to say radical—decisions that determined the church’s intellectual ministry.”

It was the idea of a true liberal education that directed his vision, and he stressed the importance of the humanities, social and natural sciences, and fine arts in that education as he developed his faculty complement at the college. In his tenure as president he set the tone for the college: a humanistic scholarship which nurtures both the mind and the spirit.

Father Nash left Campion in 1978 to become the Director of the Canadian Jesuit Missions, serving as liaison with the Jesuit missionaries in Zambia and India. On his retirement from that assignment in 1987, he became involved in the Christian Life Community movement in Toronto.

In 1994, he went into the Jesuit infirmary in Pickering, where he was cared for in his final journey. But like all great men, Father Nash’s journey continues on in the students and colleagues for whom he set the example of scholastic integrity, compassion, and humanity.

The Nash Memorial Lecture Series was founded in 1979 by Joseph B. Gavin, SJ, PhD, to honour the first president of Campion College at the University of Regina, Fr. E. Peter W. Nash, SJ, PhD (1913-1997). The Nash Memorial Lecture series is delivered annually and invites distinguished scholars from North America and around the world. Through this series of lectures, Campion College hopes to make a significant contribution to the academic life of the university and community.